The companies represented came from nearly every industry sector: banking, energy, telecommunication, government, manufacturing &  chemical industry as well as retail, entertainment, transportation, automotive and of course IT security. The delegates and speakers were all C-level management and mostly CIO / CISO.

So what are the hottest topics? Where is the industry in terms of IoT Security at the moment?

Enterprises are aware of IT and OT Security

They want to build the IoT, but they don’t want to compromise on security. With more and more devices being connected and hackers making news nearly daily, the risk to lose reputation & real assets through a security issue is real. The problem is not new architecture / technology / devices. Problem is the old heritage. 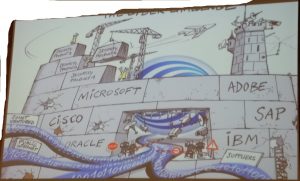 With the “Things” of different industries being connected, the need for secure Hardware gets crucial, cause you won’t be able to lock your Things up in a secure garden. New on the HSM market: Google. They presented their new project called Android Things, which enables the developer to program their IoT device. Google takes care of the kernel and provides the dev with an Android framework API that gives access to low level I/O.

Nearly everyone agreed that the IoT security is in lack of standards. Beau Woods from The Atlantic Council proposed “Minimum Hygiene Standards” which read as follows:

Furthermore the idea of nutrition facts for software came up. Which should describe all dependencies, open source code, cryptography etc. used inside any software product available.

Not only a missing legal framework gives the companies a headache but as well the missing global enforcement. Without a political consent, cheap IoT products without any security are flooding the market and form a real thread, for example inside the mirai botnet.

Collaboration instead of Competition

In a lot of keynotes and in most dialogues delegates agreed, that in terms of security the industry has to collaborate instead of compete. Cause a successful attack can hit and damage everyone. The penetration testers and open source communities that attended the conference pointed out, that companies should share their mistakes and learnings. Black and white hats have already a vivid sharing community. IT managers should follow this example in terms of best practice architecture.

Lot of other topics were discussed, like data privacy in IoT, implementing critical infrastructure regulations and blockchain as an IoT security solution.

Latest posts by egodigitus (see all)

Believes in Cryptoanarchy & hopes for the upcoming Age of digital Enlightment. Involved in the Blockchain Community & Cryptoeconomics. Research topics focused on Blockchain Applications regarding Security aspects. View all posts by egodigitus